After an episode of iCarly, some kids at school mention that a show on the Dingo Channel called «Totally Teri» used Random Dancing in an episode, calling it «Random Jumping». Carly and Sam soon realize there is more than that – they even spoofed Messing with Lewbert. So, Spencer and the iCarly team go to Hollywood to settle this, and to look for the frozen head of the founder, staying in a low-quality hotel where somebody was killed next to a window with a hobo named Hollywood. Visiting Dingo Studios, Carly and Sam learn the «Totally Teri» writers are plagiarizing iCarly skits for their own use, and they claim they have rights to do so, since they have money and power. Meanwhile, Spencer and Freddie find Charles Dingo’s (the founder of Dingo studios) head and come up with a plan (along with Sam and Carly), since they have access to the head. The next day, the iCarly group threatens to release depictions of Dingo’s head on iCarly.com unless the writers swear never to steal the show’s ideas again; Afterwards, two of the writers end up on iCarly in a skit called «Bikini Dog Food Fight». 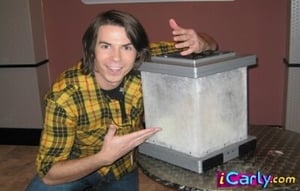